You’ve met the Website Development Team, now it’s time to meet the Content Team! Our in-house team of wordsmiths are always busy typing away (case and point) but they managed to take some time away from their keyboards to answer a few questions.  If you’re familiar with our previous ‘meet the team’ blog, you might notice a bit of a festive twist… not everyone was thrilled about this. Some of us don’t even want to talk about it.

An Obscure Fact About Eloise
When Eloise was ten, two of her brothers jumped on a shovel that had bricks stacked on it… one hit her in the middle of her forehead and she was left with a scar. We’re referring to it as her handsome Squidward moment (not that she could get any cuter).

Hobbies/Interests
Walking, playing Pokémon, swimming (river swimming, in particular), camping and generally being in water – we’re going to include baths in this too. If Eloise doesn’t leave a bath looking vaguely similar to a raisin, it’s a personal failure for her.

Top Three Dinner Party Guests, Dead Or Alive
Leonard Cohen, Alexandria Ocasio-Cortez and James Acaster. The other options were past, present and future Anastasia; Anastasia and two clones of her would also suffice.

Top Three Christmas Songs
Eloise simply answered with Fairytale of New York – The Pogues, because she doesn’t know any others, a fact that has broken the heart of our resident elf.

Desert Island Book
Stranger Music – Leonard Cohen. This was the first poetry book Eloise ever fell in love with, which she read by candlelight (due to her childhood home not having mains electricity – this wasn’t the result of pure teen angst).

Favourite Part Of Christmas Dinner
Pigs in blankets, roast potatoes, or, controversially – Yorkshire puddings. Some claim they shouldn’t be part of Christmas dinner. Eloise isn’t one of those people.

An Obscure Fact About Dan
Dan once broke his little toe on his nan’s fridge because he was skidding around in his socks. However, he still managed to make it to the cinema to see Star Wars: Attack of the Clones (Episode II) because he’s always had his priorities in order.

Favourite Work Memory
This was prefaced with, “Oh God’, but he settled on meeting Harriet (Harriet is THRILLED about this). Are you sensing a theme here?

Favourite Part Of Christmas Dinner
Pigs in blankets. No hesitation. 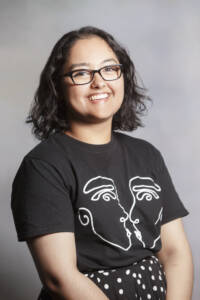 An Obscure Fact About Anastasia
Anastasia was bitten by a camel when she was three years old. The camel wasn’t available to comment on the matter at this time.

Favourite Work Memory
Every single time she and Eloise have said something at the same time, they’re in double figures at this point.

Hobbies/Interests
Animal Crossing, baking (obviously, she didn’t win Head Chef 2021 for nothing). After that, she panicked and said, “Oh God, I don’t do anything else. Oh my God, what do I do with my life? Asking politely to pet dogs? I should do that more. I read when I have the mental capacity.” She probably spoke about dogs for longer but she started rambling and people often tune out when she does that.

Top Three Christmas Songs
Baby, It’s Cold Outside – She & Him
Santa Baby – Eartha Kitt
If We Make It Through December – Phoebe Bridgers

Anastasia had to consult her Christmas playlist for this, the link is right here if you fancy a listen!

Desert Island Book
The Letters of Vincent Van Gogh and she’d “probably just read that and cry all the time”.

Favourite Part Of Christmas Dinner
Pigs in blankets. Once again, she didn’t miss a beat. 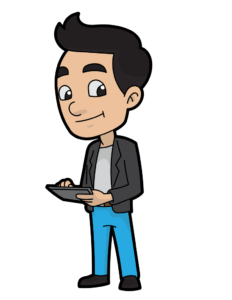 An Obscure Fact About Tyler
He once met Lady Gaga… and he was born with an extra finger on his left hand. The two are not connected… as far as we know.

Favourite Work Memory
Seeing Toby go wild at the 2021 Christmas Party. Remember Toby? He was going to perform the Napoleon Dynamite dance at said Christmas party. Much to our dismay, he didn’t manage past the first three seconds.

Hobbies/Interests
Playing video games or watching reality TV. Tyler is also something of a social butterfly, he lives for a weekend and you can probably find him inebriated or watching cat videos if it’s not a school night.

Desert Island Book
Tyler isn’t a big reader, but if he had to pick, he’d go for anything by Terry Pratchett. Ultimately, he’d prefer to watch the film or show. Or maybe play the game!

Favourite Part Of Christmas Dinner
Tyler said, “the anticipation and the lead-up because the meal is usually a let down”. As Tyler’s brother usually cooks Christmas dinner, maybe we shouldn’t tell him about this… Tyler is, however, partial to a turkey and stuffing sandwich on Boxing Day. 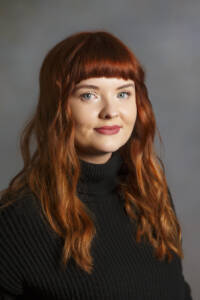 An Obscure Fact About Harriet
Harriet hates cheese. We apologise on her behalf for this statement, it does not reflect the views of the business.

Hobbies/Interests
Listening to music, films (everything about them) and reading. Basically, if Harriet can do it from her sofa, she’s in. She’s a woman after all of our hearts.

Top Three Dinner Party Guests, Dead Or Alive
Johnny Cash, Jack Black and Miley Cyrus.
Honorary mention to Harriet’s mum and grandma, both of whom are alive and well, but she did have dinner with them recently so she thought she’d mix it up.

Top Three Christmas Songs
“If I have to pick…” were the words that left Harriet’s mouth after she initially refused to answer this question! She eventually went for:

Let the record show that Harriet had to google Christmas songs, it broke Anastasia’s heart. Anastasia is our resident elf, in case her Spotify playlist didn’t give that away.

Desert Island Book
Jane Eyre – Charlotte Brontë. We’re clearly not fans of Anne Brontë. Well, Dan is but that ruins it a bit, doesn’t it?

Do you feel like you’re part of the Content Team now? We think there are some really important lessons to learn from this blog:

Eloise will get a hero’s welcome if she visits Yorkshire, Anastasia has really strong feelings about Christmas, Dan can deal with any injury as long as it means he gets to go to the cinema after sustaining it, someone other than Tyler’s brother needs to cook Christmas dinner this year, and everyone thinks it’s weird that Harriet doesn’t like cheese.

Oh, also, we all clearly love working with each other.

If you have a website that needs to be rewritten or you want some content created for your social media platforms – our content team are on it! Fill out one of our contact forms, or drop us a line on 01926 814 547 to get the ball rolling. You can even email us at info@trulycontent.com if you fancy it.